Israel? Let's better not talk about it 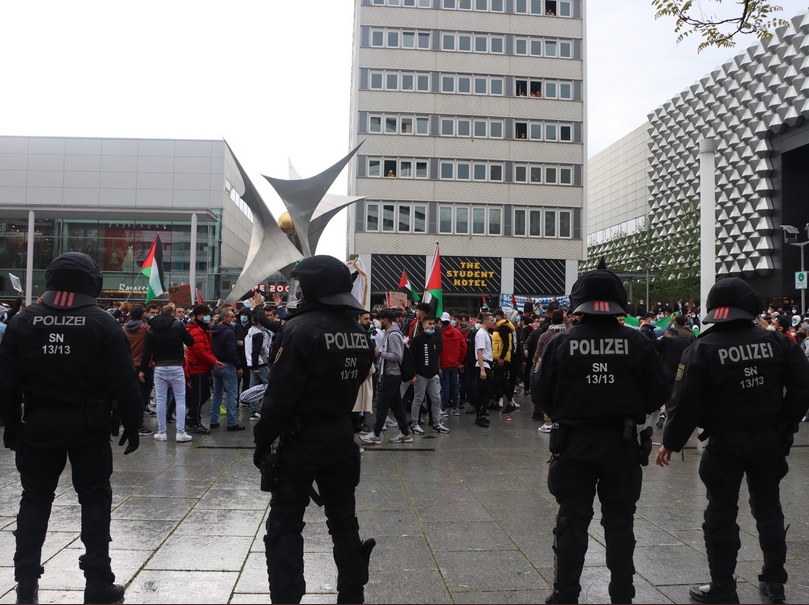 Although for most of the German anarchists the anti-germans are not something to talk about, the agenda that was presented by the pro-Israelian movement took roots in anarchist and leftist circles deep. It goes as far as attempts to pass agreements within the anarchist syndicate FAU to put an equal sign between antizionism and antisemitism. And although the push within FAU so far has failed, the anarchist movement is still getting more and more pressure from the pro-Israelian and clearly statist left to distance itself from work with the Palestinian Diaspora. With that happening inside the country, the complicated issue with the topic of Israel is also pouring outside of it. There were troubles within the international syndicalist groups because of member's support of the BDS movement which is seen by many german leftists as antisemitic.

The new wave of violence in Israel and Palestine showed a set of issues that are still going on within the leftist and anarchist movements that are not going away just by keeping it silent. Certain groups believe there is nothing to discuss anymore. It goes as far as collectives being blamed for undermining so-called silent consensus on pro-Zionist support in Dresden. For example, Anarchist Network Dresden was accused by at least one group of being antisemitic when featuring an Israeli activist in an interview for the radio.

The situation got even more complicated when a bunch of pro-Israeli Antifa organized counterprotests against demos of solidarity with Palestine. Some of those demos in Dresden, Leipzig, and Berlin escalated with participants attacking pro-zionist antifascists. There were several cases of violence against the German left that are now used right by the right to strengthen racism against the Arabs in this country, going as far as calling for deportations for antisemitism from politicians of the ruling coalition.

In political debates among anarchists and leftists, the topic is extremely charged. Some activists point that they prefer not to start the topic at all, as it can escalate extremely fast. Most of the conversations are far away from political debates and are laying in the emotional field of the pro-Israelian side. The facts of what is going on are mainly ignored in favor of some misconception of the role of the Israeli right-wing state in the whole situation.

I find it every time complicated to engage in the conversation as the attempts to create space for it are mostly ignored by the pro-zionist german leftists or anarchists. In Dresden, several attempts were made to actually bring Jewish activists to talk with the local leftists. All those events were not visited by any anti-germans however at least in one of the cases, there was again a statement about antisemitism.

The unconditional support of the state can be ok if it fits into the political ideas of the people. Many anti-germans do stick with liberal or social-democratic values that are perfectly fine with state apparatus and do believe in its role. So it is not surprising that they believe in some good mission of the Israelian state.

However, for the anarchists and anti-authoritarians, it is extremely important to maintain a critical perception of what is going on and how to move on with the topic. The lack of political debates as well as a slow claim of pro-zionist positions within the anarchist movement is showing that we are giving up our own politics without understanding where we are going.

It is clear that the anarchist movement in Germany is not capable for now to deal with the topic critically. A lot of activists did admit that although they do know about the conflict they take little to no effort into understanding it, learning the facts, and trying to build independent opinions. There is a danger in pro-Israeli “silent consensus” as it not only prevents our criticism of the Israeli government but also creates space for other topics that “nobody should be talking about” because the generations before already cleared it. This is not how the anarchist or any other progressive movements can deal with history as well as move forward.

As anarchists, we call you to keep up with critical thinking and talk about the current political events not only within the national state of Germany but outside of it on the international level. Organize discussions in your groups, watch documentaries about the regions and be critical to any facts they give you from both sides. And in case you have some extremely strong emotional connections to the region, try to build up contacts with the local communities and see what they are thinking about the situation.